Christmas Eve in the United States, which is annually on December 24, is the day before Christmas Day. It falls within the Christmas season, which is a time for people to buy presents and visit friends or relatives. 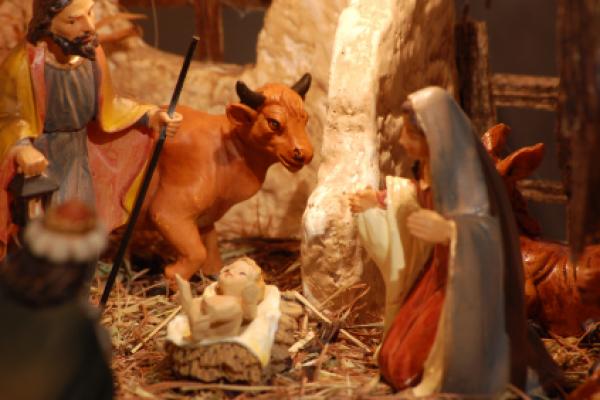 Christmas Eve is a day to remember the events around the birth of Jesus.

Since Christmas Eve is not an official federal holiday, most people have to work. However, it is a partial day off or a full day off in some states. Many workplaces hold Christmas parties or celebrations, so there is a celebratory air to the day. People who work in the retail or catering sectors often have to work very hard to meet consumer demands on December 24.

Many people in the United States decorate their homes and driveways with seasonal decorations, although some do this much earlier, starting just after Thanksgiving Day in late November. The centerpiece of the decorations is often a Christmas tree decorated with fairy lights, tinsel, angels, stars and other seasonal ornaments. Outdoor light sculptures are also becoming increasingly popular. These are many light bulbs or LEDs in the form of trees, sleighs, reindeer, Santa Claus, snowmen and other seasonal figures. Light sculptures may be placed on driveways, roofs or in gardens.

In the evening, often just before bedtime, many families, particularly those with children, will hang up stockings on the fireplace or the end of their bed. These Christmas stockings are often red with a white fluffy trim, although they may be of any design and are often much bigger than the socks that they represent. Children hope that Santa Claus, a mythical figure thought to represent an ancient European saint, will enter their home via the chimney and fill their stocking with gifts, sweets and oranges.

Christmas Eve is not a federal holiday. However, it is a partial day off in states like Kansas, North Dakota, and Virginia. It is a state holiday in Kentucky, Michigan, North Carolina, Oklahoma, South Carolina, Texas, and Wisconsin. Most schools and other educational institutions throughout the U.S. are usually closed on December 26. Many organizations will open as usual, but some may close earlier or offer reduced services. Stores are normally open as usual, but may shut earlier. Stores and malls are likely to be very busy, as people look for last minute Christmas gifts and stock up on food for the festive season.

Public transit systems may run a normal or reduced service, particularly in the evening. If you need to use public transit on Christmas Eve, is it a good idea to check the services that the appropriate companies offer carefully. Many people travel to visit family members or friends on Christmas Eve. There may be some congestion on roads and highways, particularly around major cities. Airports and long distance bus terminals may be especially busy.

Christmas Eve marks the start of the holiday season at the end of the year. For many Christians, it is a day to remember the events around the birth of Jesus. Some people, especially Roman Catholics, attend a midnight mass at church. Traditionally, the midnight mass started at midnight, just as Christmas Eve ended and Christmas Day started. However, now may churches hold this church service in the late afternoon or early evening of Christmas Eve.

Many Protestant churches also hold special services on Christmas Eve. These are often candle-lit and may be very solemn. Some include the presentation of a crib scene depicting the holy family, with statues or actors representing Mary, Joseph, the baby Jesus, the shepherds and various animals thought to be present in the stable where Jesus was born.

On Christmas Eve in 1914 and 1915, unofficial Christmas truces began in the World War I fighting. German soldiers lit candles and sung Christmas carols. On the other side, British troops responded by singing English carols. Soldiers from both sides shouted greeting and visited each other, sometimes exchanging small gifts. On Christmas Eve in 1968, the astronauts of Apollo 8 read from the creation story in the Book of Genesis. This was widely broadcast on television.

About Christmas Eve in other countries