Confederate Memorial Day is a state holiday in some states in the United States. It gives people a chance to honor and remember the Confederate soldiers who died or were wounded during the American Civil War during the 1860s. 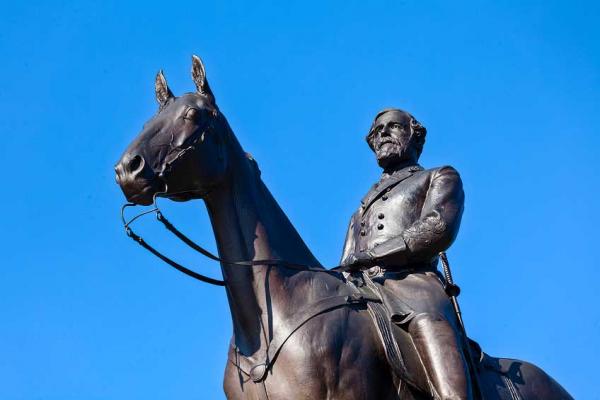 A statue of Robert E Lee, who commanded the Confederate Army of Northern Virginia in the American Civil War.

A range of events are organized on and around Confederate Memorial Day. The Main Library of the University of Georgia marks the occasion by publicly displaying the original Constitution of the Confederate States of America.

However, this type of observance is controversial, as some see it as glorifying a culture and way of life that could only exist because of the work carried out by slaves.

In these areas, state offices and schools are generally closed. However, Confederate Memorial Day is not a federal holiday and federal offices may be open. Stores and other businesses may be open or closed according to local custom. Public transit services may operate to their normal or reduced schedules. There may be some minor road closures or congestion around war memorials or important battlegrounds.

Between 1861 and 1865, there was a war between the Union and the Confederate States of America. As slavery disappeared from the northern states, but remained viable in the south, two very different ways of life arose in these sections, according to the US Department of the Interior’s National Park Service. Compromises regarding slavery, especially its extension to the new western territories, became more difficult to achieve. Social, political and economic power was at stake for both the north and the south.

The divisions began in 1860 when Abraham Lincoln, who opposed the expansion of slavery, was elected as president of the United States. Seven states in the south declared their secession from the United States before he took office. Southern states maintained various concerns regarding political ideals, property and homes, protection for their families, and economic loss.

The actual war started on April 12, 1861, at Fort Sumter in South Carolina. The last cease-fire was signed at Fort Towson, Oklahoma, on June 23, 1865, although the naval forces on the CSS Shenandoah did not surrender until November 4, 1865 in Liverpool, Great Britain. It is estimated that more than 600,000 soldiers died during the American Civil War and that about 260,000 of these were Confederates. In addition, an unknown number of civilians died in the hostilities.

In North and South Carolina, May 10 marks the anniversaries of the death of Thomas Jonathan ‘Stonewall’ Jackson (a general in the Confederate army) in 1863 and the capture of Jefferson Davis in 1865. In Pennsylvania, the organization known as the Sons of Confederate Veterans commemorates those who died while fighting for the Confederates.  In Virginia, the lives of Confederate soldiers are honored on Memorial Day on the last Monday in May. Confederate Memorial Day was first observed in a number of areas in or just after 1866.