New Year’s Day falls on January 1 and marks the start of a new year according to the Gregorian calendar. It marks the end of New Year’s Eve celebrations in the United States and gives many Americans a chance to remember the previous year. 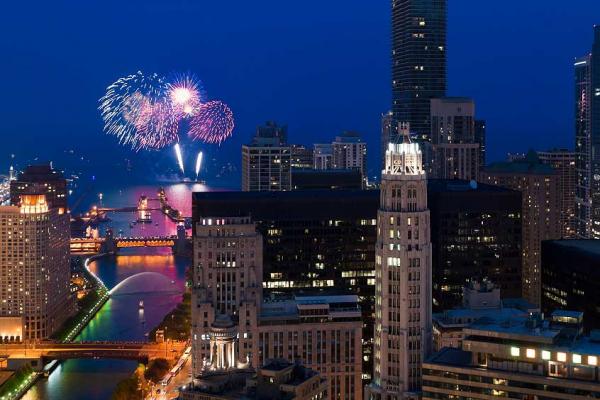 The start of New Year’s Day, at midnight, is heralded by fireworks, parties and special events, which are often televised. Very few people have to work on the day itself. For many it is a day of recovery from the New Year’s Eve celebrations the previous night. In some towns and cities, parades are held and special football games are played. The birth of the first baby in the New Year is often celebrated with gifts to his or her parents and appearances in local newspapers and on local news shows. Many people make New Year’s resolutions. These are usually promises to themselves that they will improve something in their own lives. Common New Year’s resolutions are to stop smoking or drinking alcohol, to lose weight, exercise more or to live a healthier lifestyle.

Government offices, organizations, schools and many businesses are closed in the USA on New Year’s Day. Public transit systems do not run on their regular schedules. Where large public celebrations have been held, traffic may be disrupted by the clean-up operation. In general, public life is completely closed down.

The Gregorian calendar is widely used in many countries such as the United States. This was introduced in 1582 by Pope Gregory XIII. The Julian calendar that had been in use until then was slightly inaccurate, causing the vernal equinox to move backwards in the calendar year. The Gregorian calendar was not accepted everywhere and some churches, particularly with origins in Eastern Europe, still use other calendars. According to the Gregorian calendar, the first day of the year is January 1.

A common symbol of New Year’s Day is Baby New Year. This is often a white male baby dressed in a diaper, a hat and a sash. The year he represents is printed on his sash. He rarely a newborn baby, as many pictures show him sitting up or even standing alone. According to mythology, Baby New Year grows up and ages in a single year. At the end of the year he is an old man and hands his role over to the next Baby New Year. Other symbols of New Year’s Day are spectacular fireworks exploding over landmarks and clocks striking midnight as the year begins.

About New Year’s Day in other countries